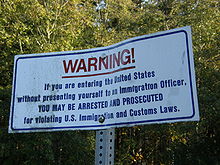 Two weeks ago, this program featured Frank Sharry from the pro-comprehensive immigration reform group America’s Voices. Some listeners informed us that they wanted to hear a different perspective, so we brought Mark Krikorian from the D.C.-based Center for Immigration Studies to the program.

The two men actually agree on some things more than you’d think. We queried Krikorian on a variety of issues – like Sharry, he agrees that with 40 percent of the undocumented people in this country here because their visas expired, there should be less emphasis on building a wall to stop people from crossing our Southern border.

Krikorian doesn’t think much of the GOP presidential candidates rhetoric on the subject, and completely dismisses Donald Trump’s call to deport all 11-12 million undocumented people from the U.S.