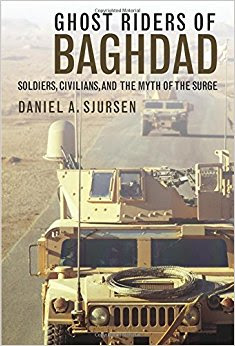 Military Decision-Making in the Trump Administration

Host Rob Lorei interviewed  Major Danny Sjursen,  a U.S. Army strategist and former history instructor at West Point. He served tours with reconnaissance units in Iraq and Afghanistan, and has written a memoir and critical analysis of the Iraq War, “Ghost Riders of Baghdad: Soldiers, Civilians, and the Myth of the Surge.”

“What I do is I authorize my military,” in response to a press question about the use of a massive bomb in an assault on Islamic State group positions in Afghanistan. “We have the greatest military in the world, and they’ve done the job, as usual. We have given them total authorization, and that’s what they’re doing.”

Sjursen warns that military generals are not always right and that it would be wrong to turnover all decision-making about foreign wars to the military — as President Trump has done. He laid out his argument in an article for TomDispatch.com, a project of The Nation magazine, headlined “The Hazards of Military Worship: Everyone Loves the Troops and Their Generals, But History Indicates That Military Advice Isn’t All It’s Cracked Up to Be.”

A possible right-wing terror cell was uncovered this week in Tampa following the news that a former neo-Nazi who shot and killed two of his roommates in North Tampa last week claimed the two young men who were killed were also neo-Nazis who had disrespected his recent conversion to Islam.

The gunman told authorities he had been a neo-Nazi before becoming Muslim. A fourth roommate was discovered to be stockpiling materials including ammonium nitrate and the radioactive elements that could be used to create a bomb.

That roommate, a member of the Florida National Guard, kept a picture of Timothy McVeigh, the Oklahoma City bomber, on his dresser.

Johnson’s career took an unexpected turn in 2009, when an analysis he wrote on the rise of “Right-Wing Extremism” in the U.S. sparked a political controversy. Under pressure from conservatives, the Department of Homeland Security disavowed Johnson’s paper. He is also the author of the book “Right-Wing Resurgence: How a Domestic Terrorist Threat is Being Ignored.”

To listen back to these interviews from Friday, May 26th, click here.