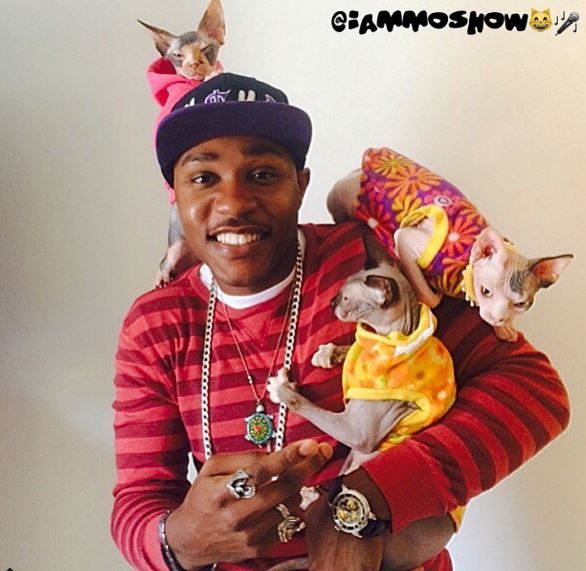 If you’re contemplating raising your kids without any pets in the home, you should know that one could turn out to be a man who raps about cats.

I say this not in the spirit of offering a cautionary tale. Heck, just the opposite.

Don’t get me wrong. I would never lobby for an animal-free household, which I think yields a parade of missed opportunities, not least the chance to plant in children the seeds of compassion and empathy.

Sometimes, though, going pet free in one’s formative years can later prompt overcompensating of one kind of another—which, in turn, can produce some enchanting and distinctive results.

Moshow, chillin’ in a ‘Cat World’

Take, for instance, Moshow—the man who raps about cats, often in videos that go viral, elevating him into something of an Internet sensation. In a March Talking Animals interview, Moshow said, “I grew up without any animals my entire life,” a statement carrying a light dusting of hyperbole.

By “my entire life,” he means his childhood, before he went to college.

But not long after he trundled off to Pennsylvania to step into the world of higher education, he met a girl—and he met Queenie, a pivotal figure in Moshow’s transition from the animal-free zone into passionate feline fan.

His girlfriend “had a black cat named Queenie that she’d had since she was like 10 years old,” he recalled. “When I would study, Queenie would sit downstairs and look at me studying.

“And she would get closer and closer, and the next thing I know, she’s sitting in my lap. Then, cat fever took over me, and I started adopting cats.”

He certainly made up for lost time, for all those years of pet deprivation. He now shares his Portland, Oregon, home with four cats—Ravioli, Sushi, Tali and MegaMam; the last three are Sphynxes, hairless cats with an otherworldly appearance.

“I grew up in the projects in Baltimore,” the man born Dwayne Molock explained, “and I’ve always felt like I was the oddball: when everyone else was on the corner, wanted to be in the house, listening to Daft Punk, in my own little world. Kind of like an outcast.

“So when it came to the Sphynx, they’re not that popular kind of cat. Sphynxes aren’t the kind of cat where people say, ‘I want a Sphynx.’ It felt like Sphynxes are the outcasts of the whole cat world.

Moshow gives his cat a bath.

“And with them not having hair, I don’t have that much hair, I just felt a connection. I feel like I’m the human Sphynx, if that makes any sense. So we click. “

Anyone who’s ever seen a Moshow video might wryly observe that saying the rapper and his cats “click” would constitute an understatement on the order of suggesting there seems to be a touch of chaos in the White House.

These cats love this guy! Whatever else is happening in any given video, one or more—or all four—of the cats are perched on his shoulder or head, or crawling around on them. Like they just can’t get enough of their rapping companion.

“It is very odd,” he agreed. “I’ve never been around cats who are so affectionate with their humans. They don’t like me to leave the house. I think because of the love connection that we have, everything that we do–we spend a lot of time together, we record together, we shoot videos together, we go on walks together. It’s because we do so much together that this bond has formed. If I walk into the house, my cats immediately run and climb on my shoulder. It’s not something that I trained them to do. This is my full-time job. I’m with my cats 24/7, and I just think that we’ve built this bond together, and it’s an undeniable bond.”

‘Cat Litter,’ from the EP iAmMoshow

If you’re starting to discern Moshow is an uncommon fellow, you’re reading the message loud and clear. And that ain’t the half of it. In conversation, he bounces between jocular self-awareness, surprise at the level of attention the cat videos have generated and the occasional jarring disclosure.

An example from that last category: “I’m a huge James Taylor fan,“ Moshow said. “I grew up listening to James Taylor. My favorite song is ‘Shower The People,’ because I’ve always been an emotional person and always been a loving guy. So James Taylor has been one of my big heroes—been like a big idol to me.”

That may seem at odds with a man who’s become a popular rapper, and began rapping as a teenager. But Moshow recalls that he was at odds with his rapping back then.

“I’ve been rapping since I was 16–I grew up rapping,” he said, adding in response to a question about the subjects of his raps, “I think I was lost at that time, you know, 16, not really sure who I was. So I think it was the traditional things, gangster stuff—talking about stuff that I didn’t live. I didn’t know who I was at that time.”

He’s pretty clear now on who he is: A guy who adores his four cats, and vice versa, and when he posts a video of himself rapping while, say, sitting in the bathtub giving Ravioli a bath, it’ll rack up nearly two million views. And a bathing-cat sequel clip will yield almost five million views.

‘I want a trillion cats’: ‘Cats and Christmas,’ iAm Moshow

He figures his degree in—you might not have seen this coming, either—Information Systems Development has helped him more deftly navigate the internet and the social media landscape, as well as making his videos more effective in reaching an audience.  (His handle for social media platforms is @IamMoshow)

At this point, his unusual career extends beyond the videos. His calendar is starting to fill up with performances and appearances ranging from local pet events to the SXSW festival in Austin. In April, also under the I Am Moshow moniker, he released a six-song EP.

Even as the Moshow juggernaut rolls along, widening out to additional opportunities and forms of success, he’s still very much a man devoted to cats, and their welfare. His videos often communicate a pro-adoption or anti-declaw theme.

Last year, he produced and starred in a video for the Oregon Humane Society, promoting adoption—and achieving significant results. “Don’t quote me exactly,” he cautioned, saying he believed all the cats featured in the video were adopted, and some 125 more found homes in the ensuing weeks. Not long after this interview, he was scheduled to make a similar video for an Oklahoma shelter.

It’s clear that, beyond the four kitties he lives with, Moshow may be cat’s best friend. In one of his videos, he raps, “I’m just a cat man trying to save the world.”

If just about anyone else uttered words along those lines, it would probably seem unforgivably grandiose.

Coming from Moshow, though, it sounds just right.

Follow this link to the March 8 Talking Animals, featuring the interview with Moshow