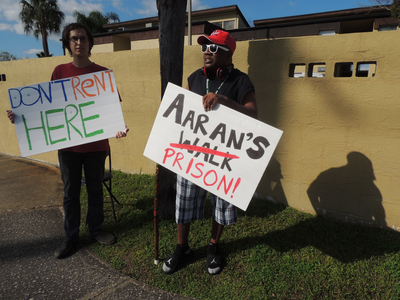 A group of activists is targeting slumlords in Tampa. Members of the Tampa Solidarity Network warned passing traffic not to rent from a USF-area apartment complex during a protest yesterday.

Two activists held a giant banner in front of Aaran’s Walk Condominiums calling Jennifer Rendahl a slumlord. Some drivers passing by honked in appreciation. Others slowed their cars to ask why. Protester Jake Vigness told them the complex’s management headed up by Rendahl enforced silly rules and often evicted residents illegally if they broke any of them.

“Well, for instance – just arbitrary rules like, children under 18 can’t be outside. If people have cell phones in the parking lot she’ll go out and talk to them and tell them you can’t be on your phone out here in the parking lot. If you have visitors over there’s a lot of rules about parking and about whether or not you can come outside and greet them. Just a lot of really strange stuff like that that we’ve heard of. We’ve heard story after story after story. It’s completely absurd.

And Carlton Williams is living in a bed bug infested unit in Aaran’s Walk. Williams reported the problem to the landlord. According to Williams, she sent a pest control company to his apartment to check it out, but the exterminator wouldn’t answer any of his questions. The landlord later told Williams that he needed to move out of his apartment for 4-6 weeks while the problem was fixed. Williams said he tried to find a place to stay, but didn’t have anywhere to go.

“I asked my friend who I know, the gentleman she claimed brought the bed bugs. I even asked my family. My family. My family [couldn’t] help because they have kids and I’m not going to move the little kids out of their room because the little kids got to stay so I’m going to let them stay in their home because that’s where they need to stay at. Last time I had termites at my house, my last landlord put is in, like, a motel.”

But the landlord didn’t do that. She wouldn’t comment for this story under advice of her attorney. Williams started asking people whether or not treating bed bugs should take so long. They all told him no. So Williams refused to leave. Instead, Rendahl offered to let him out of his lease and pay him $500 to leave.

“I don’t think I deserve this. Treat them before they mess up my furniture, my bed, my speakers, getting all in my clothes – stuff like that. The only thing she told me was I have to vacate the apartment for six weeks.”

Members of the Tampa Solidarity Network doubt an exterminator would need six weeks to treat bed bugs. Nick, one of the protesters who asked that his last name not be used, said he’s had bed bugs before so he knew the landlord’s claim was bogus.

“All we had to do leave the house or the apartment for four hours while the guy was there treating and he did that once a month – and he did that for – oh no, he did that twice a month, sorry – and it ended up costing us, all together, $175 for him to treat our bed bugs.”

Nick said the group called the company who did the estimate on the apartment’s pest problem and they were told even bad cases of bed bugs shouldn’t take that long.

“We’ve also called two other pest control agencies to see what their estimates were. One of them laughed at the idea of having to move out for 4-6 weeks and the other one said at most you’d have to leave for two days if we tented the whole building.”

WMNF also asked three local pest control specialists if treating bed bugs could ever take that long and they all said no. Ivan Lenoir, a renter’s rights attorney said even if it did, it’s the landlord’s responsibility to make sure the tenant has a place to stay.

“If the landlord cannot fix the problem within seven days then the landlord must either, A – give the tenant a rent reduction or B – provide the tenant some kind of monetary compensation so they may find somewhere else to live during this period in time that they are displaced from their home.” Prime Lawyers Workers Compensation Attorney’s of San Jose understand how hard it can be to deal with the system when you’re grieving. However, they also understand the importance of quick action when seeking death benefits. The state places strict time limits on collecting death benefits.

Lenoir added that Williams’ refusal to leave isn’t necessarily a reason for the landlord to evict him.

Williams spoke to an attorney about his situation, too, and was told basically the same thing. So Williams asked the landlord if he could stay in one of the complex’s vacant units while his was being treated.

“I did and she said told me she’s not going to put me in another vacant apartment because she know I probably would have put bed bugs in the other apartment.”

The Tampa Solidarity Network is a spin off of a similar group in Seattle that started in 2008. Their goal is to put numbers behind causes. Williams’s bed bug problem is their first effort, but Jake Vigness, one of the group’s organizers, said they want to help others in similar situations.

“Well, the thing is, so often in our daily lives we deal with authority figures who are able to basically get away with abusing their power and their position and a lot of times we really internalize that and we always ask what have we done wrong first. And that’s good – it’s good to have personal responsibility, but we really have to answer issues collectively. So, the idea behind the Tampa Solidarity Network is basically to get people to direct action campaigns to get people to basically stand up for their rights and to get some control over their lives.”

“I know something seems simple, like it’s not, like a big cause like save the earth or whatever, but I think that for the poor and the disenfranchised, they are a cause. You know, your life is a cause. Even these little things should be stood up for. People having control of their lives is something that’s important – I think it’s fundamental to democracy.”

The group’s website has more information about what’s happening with Carlton Williams and other direct actions.