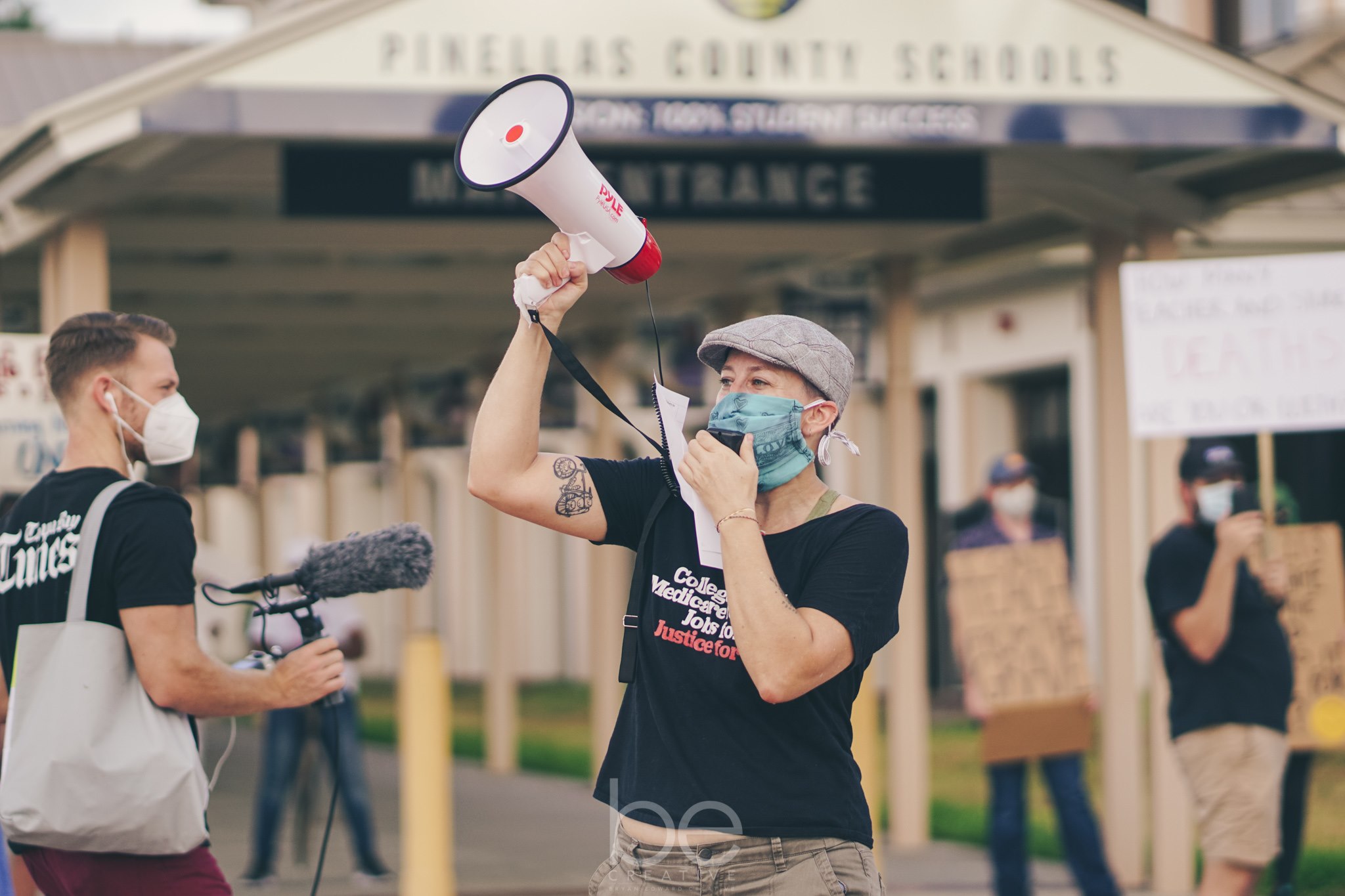 Many Florida students, teachers and school staff are attending in-person classes during a deadly pandemic.

Some students went back to in-person classes Monday morning in Pinellas and Pasco Counties. This week Hillsborough students and teachers start the year online. Manatee County students have been back for a week. According to the Bradenton Herald, there have been coronavirus cases in at least nine schools.

On WMNF’s MidPoint Monday one guest was a Pinellas County high school science teacher who feels so strongly that it’s not safe yet to return to classrooms during the coronavirus pandemic that she has taken a leave of absence.

Dr. Christy Foust has been on WMNF before. She helped organize the teachers’ protests outside Pinellas School District building asking that there not be a return to in-person instruction until after the coronavirus danger had passed.

Now she’s back because of new developments.  During teacher planning days before students arrived, she made the decision to take a leave of absence.

Last week, Florida education commissioner Richard Corcoran told Fox News that he expected all teachers assigned to classrooms to show up or “they can get terminated.” The Tampa Bay Times points out that Corcoran’s ‘office has no power to either hire or fire school district employees — a fact he later acknowledged to Florida Politics.”’

“Well technically I’ve gone through official means, right? I filled out the paperwork to take my leave of absence. I’m not just a no-show, and that sort of thing. So, personally I’m protected.

“But I don’t think anyone should be forced to go back to unsafe working conditions. In whatever form we work or whatever type of work we’re talking about, everyone deserves to have those sort of safeguards.

“Of course, different jobs look different. There are different risks associated with a coal miner compared to a teacher. But those coal miners deserve personal protective gear that is fit for their jobs and they deserve to be as safe as they can be.

“So the fact that [Corcoran is] threatening teachers to go back to these unsafe conditions when all along we’ve been telling them that we think it’s unsafe and we don’t think we should go back and that we should close and yet you haven’t been listening to us. He’s bullying people.

“So I absolutely don’t think it’s right that he’s threatening folks especially when it is not even his jurisdiction to do so. He’s throwing around threats when he doesn’t have the power to do that. At least he owned it, so there’s that.

“But very, often there have been other threats that just kind of leave there hanging and hoping nobody will pick up on it. People shouldn’t be forced to go back to these positions.

“That’s extortion. ‘Go back to your job or die.’ They’re basically putting people in that position. And it’s terrible.

“And with all of my co-workers, I haven’t seen anybody who feels good about this. There are people that are trying to put their best face on it and they’re going to go in and they’re going to try to make those kids feel as safe as they can and things like that. My heart goes out to them.

“But it is not safe and it’s not right they’re being forced back into buildings when it is unsafe.”

On Monday a Leon County Judge ruled today in favor of the Florida Education Association’s legal challenge to Florida’s requirement that school campuses reopen this month. According to the Tampa Bay Times, Judge Charles Dodson said Florida has “essentially ignored the requirement of school safety.” Dodson also found that the Department of Education’s order essentially overrode school boards’ constitutional authority to operate their own school systems. The state is expected to appeal.

The guest on the first half of the show was the lawyer for two protesters who were struck by vehicles in Tampa.  Gretchen Cothron represents Jae Passmore and Jason Stuart Flores.