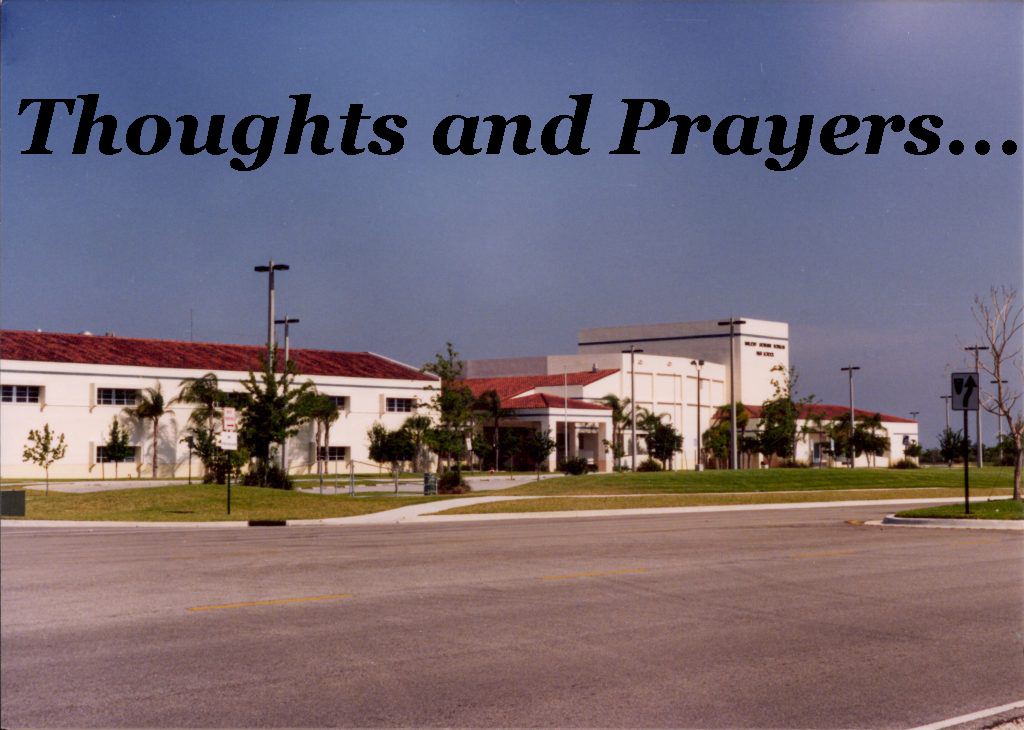 Seventeen people were murdered at the Marjorie Stoneman Douglas High School in Parkland, Florida yesterday. It was the 18th school shooting in the US in 2018. It was the first in Florida of the year. 19 year old Nikolas Cruz has confessed to the shootings. He legally purchased the Smith & Wesson M&P AR-15 semi-automatic rifle at a local gun dealer.

Calls for action plus thoughts and prayers

Florida political leaders weighed in on the tragedy. Florida Governor Rick Scott, whom the NRA describes as a strong supporter of the Second Amendment, declaring ‘Governor Rick Scott has now signed more pro-gun bills into law — in one term — than any other Governor in Florida history’,  also tweeted out that something must be done. 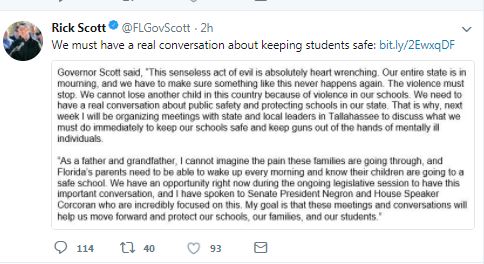 Governor Scott has earned an A+ from the NRA. Florida Senator Marco Rubio, who has received a lifetime total of over $3.3 million from the NRA, knew enough not to engage in the tired cliche of ‘thoughts and prayers.’ Instead he told people to find courage. Rubio also focused on the mental state of the shooter, not Cruz’s ownership of the AR-15.

FL Sen. Majority Leader WiltonSimpson called for more protection in school systems, such as having armed guards in the schools. Simpson has received an A+ rating from the NRA.

President Donald Trump has focused in his statements on the mental health of the shooter. 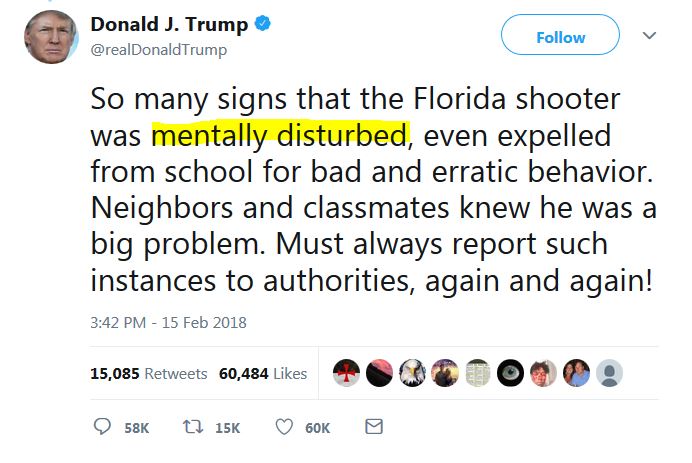 Twitter reacted by reminding the president that he signed a bill loosening restrictions on gun purchases by the mentally ill. Those restrictions probably wouldn’t have affected the Stoneman Douglas shooter, but the irony remains. The NRA has confirmed that it has spent at least $30,000,000 for Trump’s election. There are reasons to believe that the NRA helped channel Russian money into the 2016 election. The AP wrote earlier this month,

News reports last month said the FBI is investigating contact between Alexander Torshin, who is the deputy governor of Russia’s central bank and a close ally of President Vladimir Putin, and the NRA. Wyden is ranking member of the Senate Finance Committee, as well as a member of the Senate Intelligence Committee, which is conducting a probe into Russia election meddling.

Comedy writer Beth Kalb tweeted out how much money the NRA had given each politician who tweeted condolences over the Parkland shootings.  She summed it up with retweet from the Chair of the Republican Party. 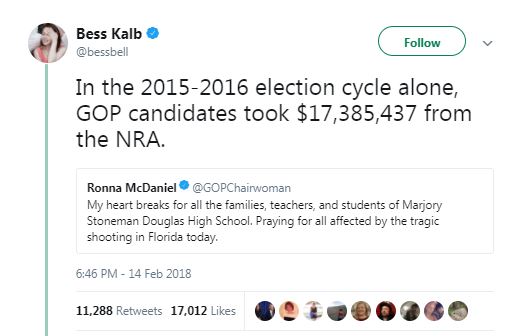 Florida has received a failing grade in gun safety from the Gabrielle Giffords founded organization, Giffords Law Center to Prevent Gun Violence. The study was done prior to the latest shooting. About half the states in the US received failing grades. According to the New York Times, it is easier to buy an AR-15 than a handgun in Florida.

While Florida has a three-day waiting period for handgun purchases, anyone without a felony record, domestic abuse conviction or a handful of other exceptions can walk into a gun store, wait a few minutes to clear a background check, and walk out with an AR-15-style rifle, magazines and ammunition.

Under federal law, you also must be 21 to buy a handgun from a firearms dealer. But 18-year-olds can buy semiautomatic rifles.

Florida Agricultural Commissioner Adam Putnam, who is also a Florida gubernatorial candidate, has a provision in the agricultural appropriations bill, SB 740, that grants people concealed weapon permits after 90 days whether or not the background check on them has been completed. That was supposed to be voted on today, but the vote was delayed.