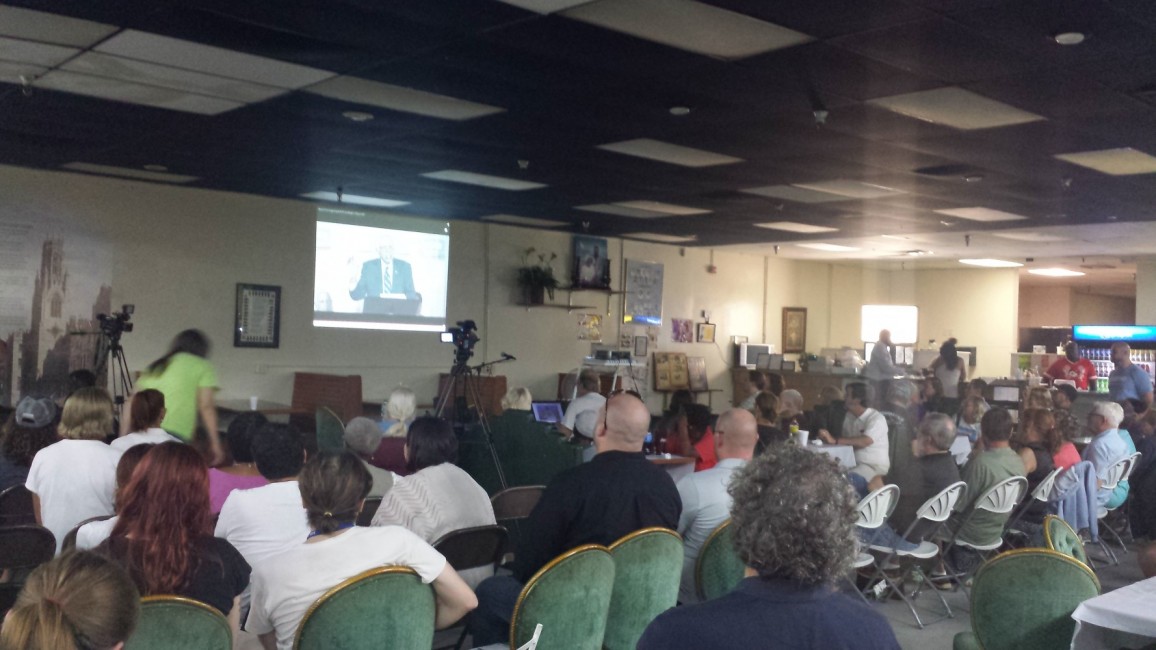 Last night, dozens of Bernie Sanders supporters gathered at Atwater’s Best Barbeque in south St.Pete to hear the Vermont senator make his case for the presidency via streaming video.The gathering was a part of major grassroots effort to mobilize his base and attract new supporters.

It was one of more than 3000 independent watching parties across the country that tuned-in online to watch a livestream of Sanders’ speech from Washington D.C.

Amos Miers, one of the events organizers, said this is a new approach to campaign organizing.

“this is something new, well having a simultaneous meetup across the nation is like this isn’t new, but starting this early in the campaign, to kick it off,  is new. Bernie has been campaigning a few months now in a few states but now he is kicking this off nationwide,” said Miers “Last I checked, there is over 3500 meet-ups, over 100,000 at these events and simultaneously we are going to watch Bernie Sanders broadcast in, talking about how to kick this thing off. So its an amazing nationwide kick-off  event.”

The crowd clapped and cheered as Sander’s implored the public to take back the country from monied interests, institutionalized racism and income inequality.

“We cannot continue to maintain a starvation minimum wage of $7.25 an hour. It is wrong that people who are working 40 to 50 hours a week and are still living in poverty,” said Sanders in the video broadcast.

Carla Bristol, a local art gallery owner, said she was impressed with Sander’s platform and how he addressed the issues that are important to her.

“definitely what’s going on with black women and men in America with police brutality, I thought his stance on immigration was very positive, that’s what I want to hear. So things like that made me say ‘I need to take a closer look at him’,” said Bristol.

“I think Bernie Sanders is the one that at least I think speaks to the needs of the people. Hopefully, people will learn more about him,” said Rumph.