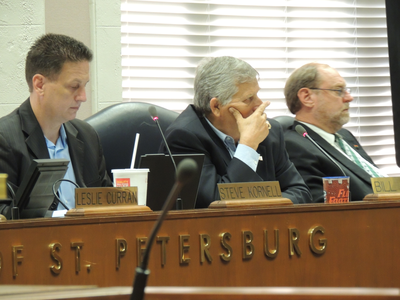 St. Petersburg City Council will consider a new budget for final approval Thursday; but the union representing more than 1200 city workers is upset at a proposal by Mayor Rick Kriseman to eliminate annual step increases for employees in exchange for an across-the-board 3-percent raise.

Rick Smith is chief of staff for the Florida Public Service Union / SEIU.

“I think it’s a critical issue. And the reason why steps came into place in the first place was steps were created in the mid-70s with an influx in women in the workforce and minorities, African-Americans, mostly in the City of St. Pete. The step plan was put in there at a certain point to guarantee equal pay for equal work. So for example in the blue-collar steps, you have a period of nine years and then you’re making the same amount of money as the person doing the same job as you. This is really   a critical factor. And if the city wants to talk about changing the way people are compensated we have to have – and this is a must – some implementation which would guarantee equal pay for equal work. If you work in Parks & Rec and you dig a hole, you should get paid the same as the person next to you digging a hole. If you’re a clerk and work in the city building, you should get the same pay. So this concept of equal pay for equal work — that is really the bottom line where we’re coming from. And can we craft an agreement out of that concept? I remain hopeful.”

Smith says he is encouraged that St. Petersburg City Council Chair Charlie Gerdes said they would put the 3% employee raise in the budget plus a little more to deal with the results of contract negotiations.

“A lot of people, 50 people, have been planning on getting probably around an average of a 13% wage increase. That’s gone — taken away. So just on the face of it I don’t know if it’s sound fiscal policy, but it is definitely concessionary.”

City Council will consider the budget during a hearing Thursday beginning at 6:30 p.m.