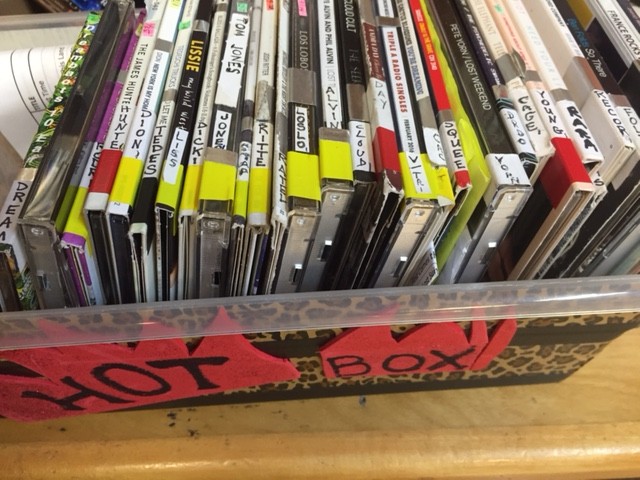 WMNF’s Hot Box features the new releases that Randy Wind (WMNF Program Director) and Flea (WMNF Music Director) want you to hear. DJs at WMNF listen to a ton of music every week to prepare their shows, and the Hot Box highlights some goodies for them.

Here’s what is in this week’s Hot Box:

Lake Street Dive’s newest album, “Side Pony,” is full of catchy hooks and great vibes that will get you swaying from side to side. The band has continued to develop its sound, adding more and more pop influences with each album, leading to an excellent lineup of tracks.

“Spectacular Failure” — This song weaves a toe-tapping story of a hopeless lothario that is more reminiscent of the band’s previous albums.

“How Good It Feels” — With more than a little sarcasm, this song is a sweet, mellow ballad about love and heartbreak.

“Side Pony” — The title track is all about loving yourself and being confident through the metaphor of rocking a side pony hairdo. Listen to this, have fun, and above all else, be yourself.

“Can’t Stop” — If you are looking to dance, look no further than this track. The most pop-influenced song on the album, it will pick you up off your feet and you will want to listen again and again.

Coming to Gasparilla Music Fest, Charles Bradley’s voice has evolved from a lifetime of paying dues, having nomadically labored for decades at various day jobs from Maine to Alaska singing and performing in his spare time before re-settling in his hometown Brooklyn and eventually finding a musical home at Dunham/Daptone. In his distinctively rough-hewn timbre one hears the unmistakable voice of experience each note and gruff infection a reflection of his extended, sometimes rocky, personal path. It s only fitting that No Time For Dreaming s producer Thomas ”Tommy TNT” Brenneck (also a member of The Dap-Kings and The Budos Band) would recognize in Bradley a kindred musical spirit a singer whose performances exude both raw power and poignant beauty.

Good to have her back! WMNF loves Sarah Borges and she has dug deep into unexplored territory for the new songs on this release – more rock n roll and less twang. However, “digging deep” has never been a problem for someone with her amazing talent as we have seen in her live shows over the last ten years.

Livin’ on a High Note sounds like a happy album. Featuring production by M. Ward and boasting songwriting credits from Nick Cave, Neko Case, Justin Vernon and others, its burst of beneficent energy is refreshing after the cloistered prayer of last year’s Your Good Fortune and two thoughtful Tweedy records. The tempos on here percolate amiably, with flashes of horns and bold basslines supplied by members of her longtime backing band. Ward knows to keep things airy and light and to give Mavis’ voice some space to move around.

Randy played four songs off this amazing album last week. Some of the reviews:

New York Times: “A sprawling kaleidoscopic invocation of the life force with songs that veer from jubilation to simmering prayerful meditation.”

Rolling Stone: “The instrumental arsenal of the Arcade Fire mixed with the gentle electronic throb of the Postal Service.”

Denver Post: Top 12 Albums of the Decade- “It’s impossible to not be moved…”

The Record Company – Give It Back To You

L.A.-based buzz band The Record Company has already been hailed by LA Weekly for making bluesy music that would sound more at home in a sweaty, backwoods Mississippi juke joint, while Time Out Los Angeles has described their sound as reminiscent of some of the best acts of the 50s and 60s like if John Lee Hooker and the Stooges had a well-behaved love child. The comparisons are apt….. a fresh take on classic rock ‘n’ roll that has proven appeal. – Amazon.com

Dylan LaBlance  – Cautionary Tale
The Louisisana singer songwriter is climbing the NonCom Triple A and Americana charts with a sound that reminds both Flee and me of Ryan Adams of old.