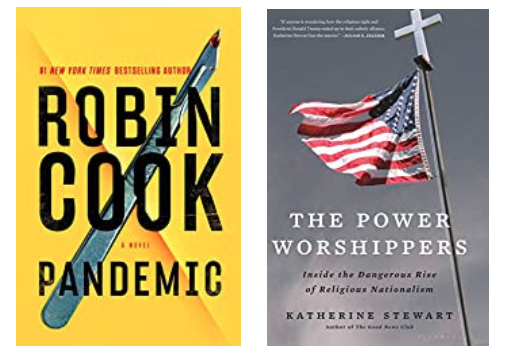 New York Times-bestselling author Robin Cook wrote Pandemic, his medical-thriller more than two years before Covid-19. The pulse-pounding story begins when an unidentified, healthy, well-dressed woman is struck down by a sudden respiratory illness on the subway as opportunist thieves snatch her phone and backpack. By the time she’s rushed to hospital, she’s dead. Ending up on forensic pathologist Dr. Jack Stapleton’s autopsy table as the potential victim of a contagion, reveals surprising findings. Fearing what could be the first in a severe outbreak of a deadly virus similar to the 1918 influenza pandemic, Jack works in overdrive for a diagnosis and to identify the woman. A task made more urgent when two other victims succumb to a similar rapid death. But nothing makes sense until his investigation leads him into the fascinating realm of CRISPR/CAS9, gene-editing biotechnology that’s captured the imagination of the medical community. . . and the attention of its most unethical members. Cook’s critical opinion of the greed dominating the business of the medical professions and the sad politics of health care in the United States makes this so pertinent now, as we live through a real pandemic.

For too long the Religious Right has masqueraded as a social movement preoccupied with a number of cultural issues, such as abortion and same-sex marriage. In her deeply reported investigation, Katherine Stewart reveals a disturbing truth: this is a political movement that seeks to gain power and to impose its vision on all of society. America’s religious nationalists aren’t just fighting a culture war, they are waging a political war on the norms and institutions of American democracy. Stewart pulls back the curtain on the inner workings and leading personalities of a movement that has turned religion into a tool for domination. She exposes a dense network of think tanks, advocacy groups, and pastoral organizations embedded in a rapidly expanding community of international alliances and united not by any central command but by a shared, anti-democratic vision and a common will to power. She follows the money that fuels this movement, tracing much of it to a cadre of super-wealthy, ultraconservative donors and family foundations. She shows that today’s Christian nationalism is the fruit of a longstanding anti-democratic, reactionary strain of American thought that draws on some of the most troubling episodes in America’s past. It forms common cause with a globe-spanning movement that seeks to destroy liberal democracy and replace it with nationalist, theocratic and autocratic forms of government around the world. Religious nationalism is far more organized and better funded than most people realize. It seeks to control all aspects of government and society. Its successes have been stunning, and its influence now extends to every aspect of American life, from the White House to state capitols, from our schools to our hospitals. The Power Worshippers is a brilliantly reported book of warning and a wake-up call. Stewart’s probing examination demands that Christian nationalism be taken seriously as a significant threat to the American republic and our democratic freedoms.