A former Chicago Police Department commander who went to prison after being convicted of obstruction of justice and one count of perjury relating to accusations of torturing dozens of suspects died recently in Hillsborough County; and because of those torture allegations, activists plan protest the funeral of Jon Burge in Ruskin Friday.

“Jon Burge was a Chicago Police officer who, from the 80s til the [1990s] ran – well, basically, he tortured over 100 African-American and Latino men in order to extract confessions from them for crimes. So he was found guilty of lying about torturing the people. So he was sent to prison and he got out early.” 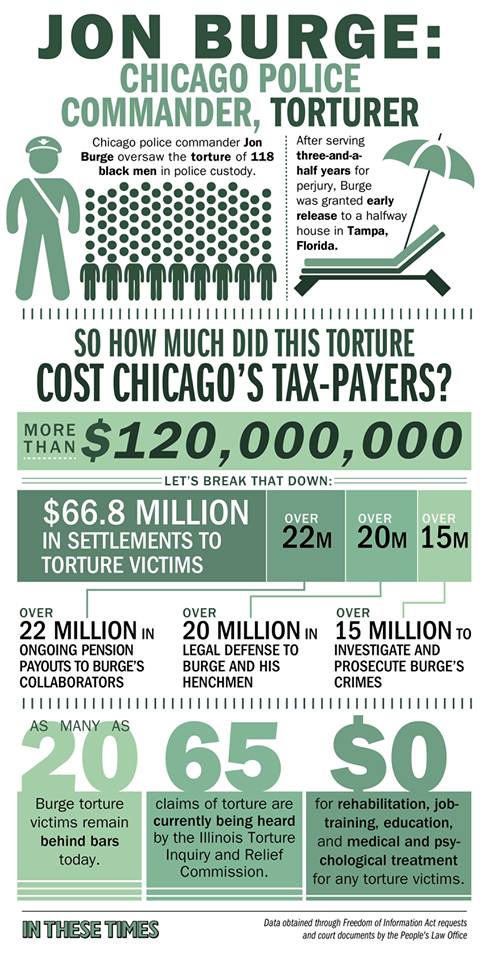 He was a Chicago Police commander. Chicago got sued for all this torture that happened under his command. What kinds of penalties did Chicago – the taxpayers I guess, of the city have to pay for the torture caused by this person’s command?

Jon Burge died recently and you’re going to be protesting outside the funeral home. Why?

“We’re going to be doing it to raise consciousness about, one, the ongoing crime of all of the torture victims who are still behind bars off of illegally-extracted confessions and we’re also going to be connecting it to, again, the Laquan McDonald case and pushing for a conviction.

“We’re protesting the funeral just to raise consciousness of the fact that some police officers are able to get away with just horrible crimes and go on living their lives. So we want to make sure that people remember that this man was a torturer. He was responsible for some of the worst, most racist excesses of the Chicago Police Department, which is notoriously racist police department in the United States.”

Some critics might say that by protesting a funeral you’re adopting the tactics of the Westboro Baptist Church.

“Yeah, I disagree with that. I think that the targets of the Westboro Baptist Church are by and large good people who don’t deserve the harassment and attacks from Westboro Baptist Church. Meanwhile, we also have this trend sort of whitewashing the crimes of people who were not very good people and trying to celebrate these people who committed these horrible crimes. We just think it’s important to keep up the fight against police crimes and exposing them. Even if some people might be offended by that. But the fact of the matter is, where’s the offense for the over 20 people who are still in prison today over his torture? Or the hundreds of people who have been tortured at his hands?”

Sep 19, 2018 6:54PM (GMT 22:54) – 729 words
By HERBERT G. McCANN ,  Associated Press
Eds: Adds comment from police union. With AP Photos.
CHICAGO (AP) — Former Chicago police Cmdr. Jon Burge, who was accused of torturing suspects in his South Side police district but was never prosecuted for the alleged crimes, has died, a Florida funeral home confirmed Wednesday. He was 70.Burge led a “midnight crew” of rogue detectives accused of torturing more than 100 suspects, mostly black men, from 1972 to 1991, in order to secure confessions. His alleged victims were shocked with cattle prods, smothered with typewriter covers and had guns shoved in their mouths.Burge was fired in 1993 and sentenced to prison in 2011 for lying in a civil case about his actions. It was too late to charge him criminally on the torture charges.Sarah Zipperer of Zipperer’s Funeral Home in Ruskin, Florida, on Wednesday would confirm only that the business was handling his remains. She refused to give the cause or date of his death, citing the wishes of his family.In 2015, the city of Chicago agreed to pay $5.5 million in reparations to 57 Burge victims. G. Flint Taylor, a civil rights attorney and lawyer for some of the men, estimates the price tag for all Burge-related cases is about $132 million.The allegations against Burge and his men even helped shape Illinois’ debate over the death penalty. Then-Gov. George Ryan released four condemned men from death row in 2003 after Ryan said Burge extracted confessions from them using torture. The allegations eventually led to a moratorium on executions in Illinois. The state officially abolished the death penalty in 2011.Word of Burge’s death came amid the murder trial of a white Chicago police officer in the fatal shooting of black teenager Laquan McDonald . Video shows officer Jason Van Dyke shooting McDonald 16 times as he walked away from police.The possibility of such a trial would have seemed remote during Burge’s time on the force.

“With the passing of Jon Burge, we must reflect on the dark legacy that he embodied,” said Lori Lightfoot, a former federal prosecutor who once led a civilian body that oversees disciplinary cases involving officers and a candidate for Chicago mayor. “So many lives shattered, and a horrible stain on the legitimacy of policing that resonates today.”

Craig Futterman, a University of Chicago law professor, said Burge’s actions were despicable, but pointed to broader systemic issues within the Chicago Police Department for allowing the alleged torture to continue for so long.

“He could not have engaged in more than two decades of torture of black folks without a system that protected torturers and was complicit in ensuring that officers like Burge could torture black folks with impunity,” Futterman said.

That system “is a primary reason why there is such a deep distrust between the black community and police and why police continue to struggle to solve violent crime, something they can’t do without the trust (of the community),” he added.

Chicago’s police union issued a statement on its Facebook page expressing condolences to the Burge family, saying it “does not believe the full story about the Burge cases has ever been told.” But many postings in the comments section denounced Burge.

Dean Angelo, former head of the Fraternal Order of Police in Chicago, insisted that Burge “put a lot of bad guys in prison.”

“I don’t know that Jon Burge got a fair shake based on the years and years of service that he gave the city,” Angelo told reporters during a break at the Van Dyke trial.

At Burge’s 2010 federal trial, Burge’s lawyers called the accusers thugs and liars who were maligning an honorable man who had served in the U.S. military in Korea and Vietnam and returned with a Bronze Star. Burge took the stand and broke his long silence, repeatedly denying he had tortured anyone. A jury disagreed and found Burge guilty of perjury.

At his 2012 sentencing, one alleged victim said Burge was so cruel that he laughed while he tortured him. Burge said he was “deeply sorry” for the disrepute his case had brought on the Chicago Police Department, but he offered no apologies for his actions.

U.S. District Judge Joan Lefkow cited Burge’s “unwillingness to acknowledge the truth in the face of all the evidence” and sentenced him to 4 1/2 years in prison.