Duncan’s guest on Talking Animals this Wednesday will be Laurie Anderson, the long-celebrated artist and musician, who recently made an acclaimed film, “Heart of a Dog.”

An inventive work offering a spirited visual mélange, “Heart of a Dog” functions on one level as a multifaceted musing on loss, spurred by the death of Anderson’s beloved rat terrier, Lolabelle.

While traveling cinematically through various aspects of Lolabelle’s life, illness and passing constitute the heart of the film, Anderson also explores a number of other concepts and themes, including how we tell stories and how those stories (and their meaning) can change over time, observations about Sept 11 and the ensuing stepped-up security and surveillance measures, and more.  Anderson weaves in the sense of other losses-the deaths of friends, her mother, and her husband, Lou Reed. 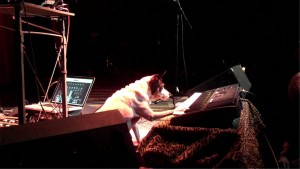 As one measure of how uniquely inspired and inspiring this movie is, both of the New York Times main film critics have raved about “Heart of a Dog,” with A.O. Scott calling it a “philosophically astute, emotionally charged meditation on death, love, art and dogs.”

Talking Animals is a weekly program on WMNF that features interviews about animals and animal issues, animal songs, animal comedy, animal news, and even a “Name That Animal Tune” quiz, with host Duncan Strauss.

Plus Duncan will also be talking to Tracey Stewart of the Farm Sanctuary. She is the wife of comedian and former Daily Show host Jon Stewart, and the two of them have poured their hearts into the Farm Sanctuary, which rescues and protects animals.