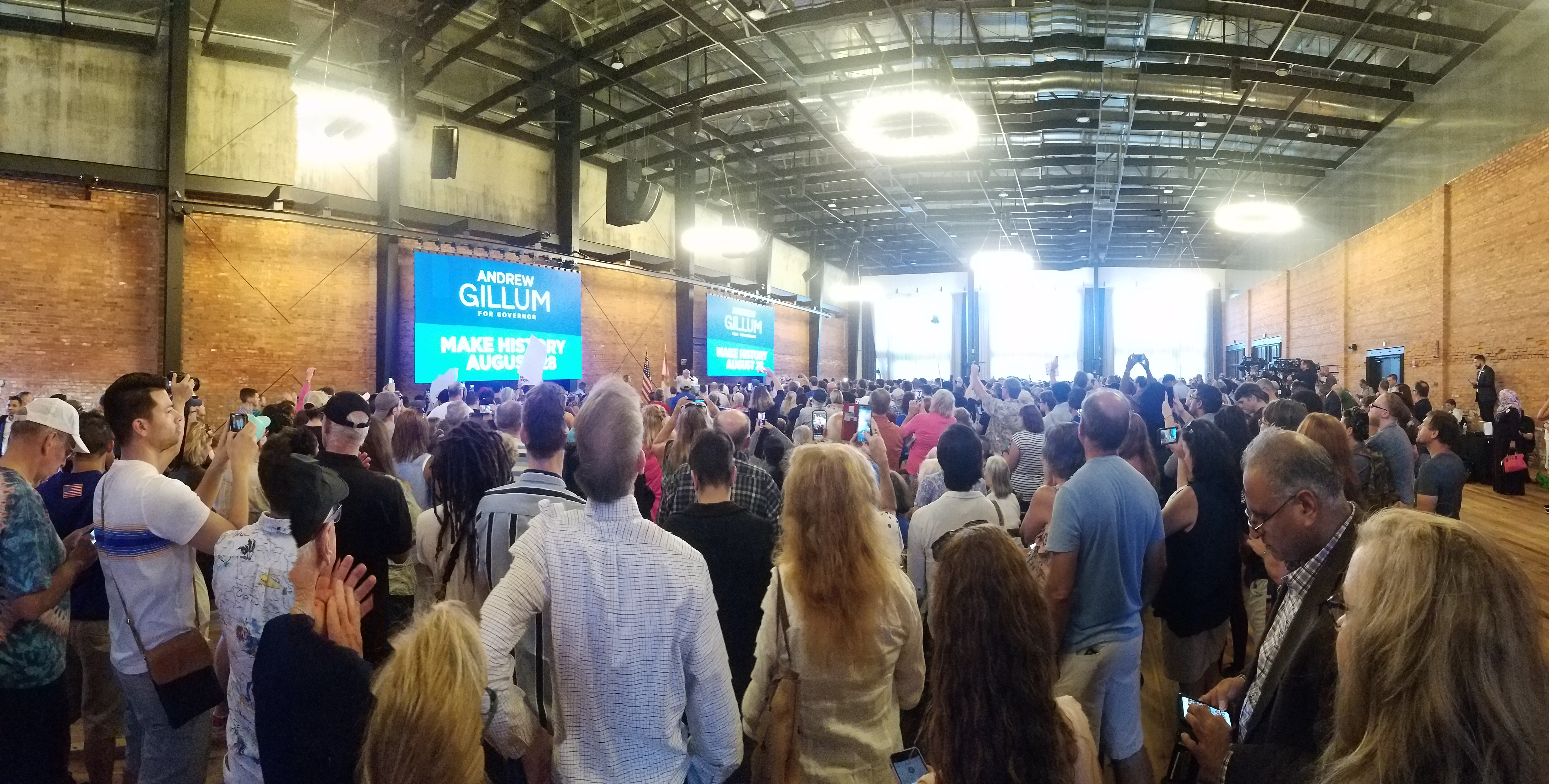 Long lines to get into Bernie Sanders rally for Andrew Gillum in Tampa. By Seán Kinane / WMNF News (17 Aug. 2018).

More than 1,000 people packed into the Armature Works building in Tampa Friday morning to hear 2016 presidential candidate Bernie Sanders rally support behind Andrew Gillum in his race for Florida Governor; Gillum is one of seven Democrats battling for the nomination in the primary election that ends on August 28. Gillum told the crowd that he can win — if Democrats vote in the primary for a true progressive instead of a Republican-lite candidate. 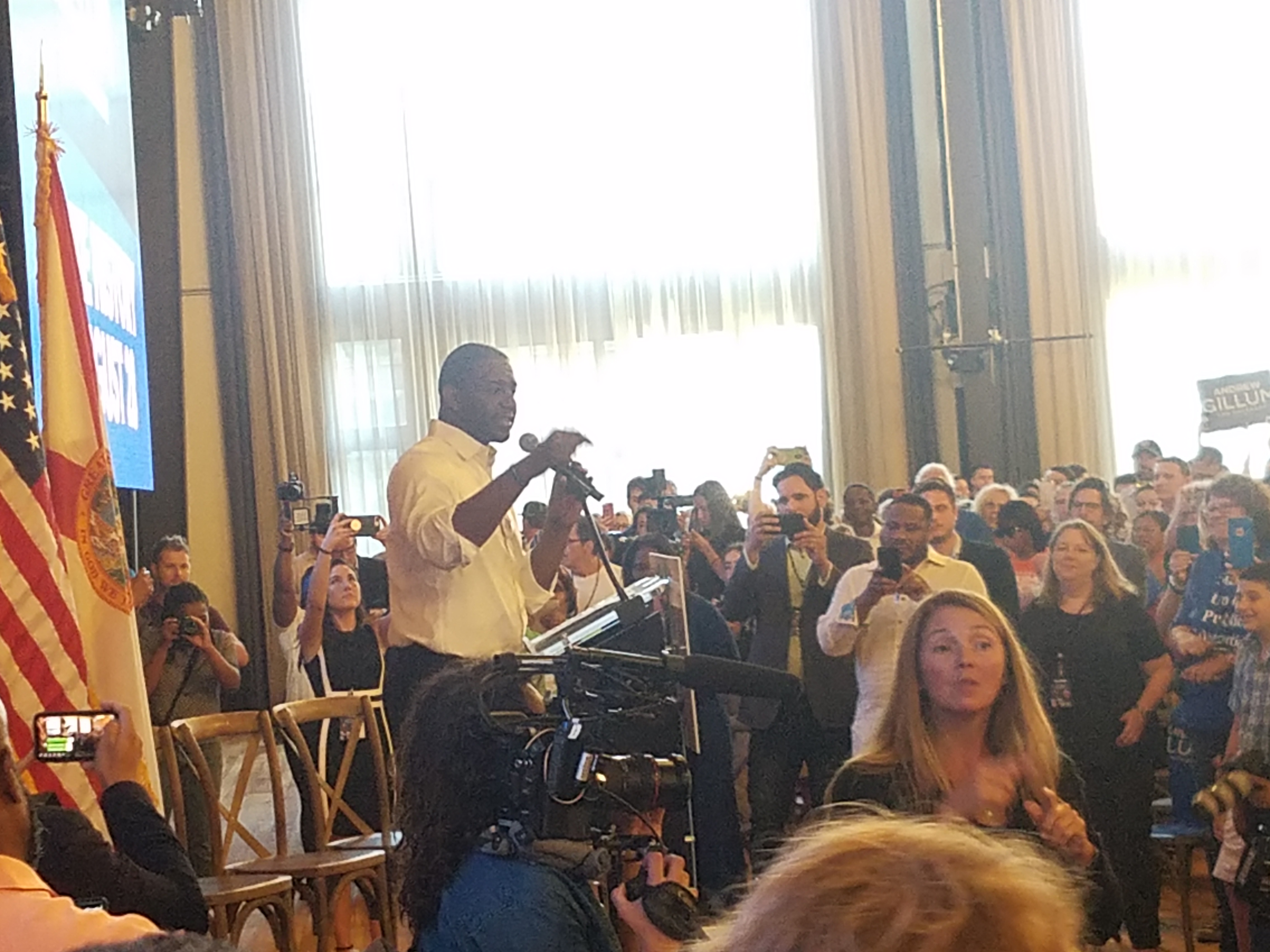 “The way a Democrat is going to win in November is by turning out those voters who feel like they’ve been ignored, underrepresented, not reflected in politics, not reflected in the kind of issues that impact regular working people. We’re going to give those voters a reason to turn out and vote for us. With your help. With your help. It’s been 20 years since a Democrat has held the office of governor of this state. And for some reason we believe that we’ve got to keep putting up these candidates on the belief that a Republican when they have a choice between a real Republican and a Republican-acting Democrat that they’re going to choose the real Republican every single time. And our voters are going to stay home. So if we are serious about winning this race, we’ve got to show up like we have never shown up before. We have to vote. We have to vote! We have to vote! We have to vote! Y’all, we have to vote like our lives depend on it. Because if you are Marqueis McGlockton in Clearwater, Florida, your life does depend on winning these elections. It does depend on it. It does depend on it.”

Listen to this quote here:

Listen to the full speech by Gillum here:

McGlockton is the man who was shot and killed during an argument over a handicapped parking space in a case that has reignited the debate over Florida’s “stand your ground” gun law.

Bernie Sanders slammed Governor Rick Scott and other Florida leaders on the state’s lack of action on solar power and climate change. 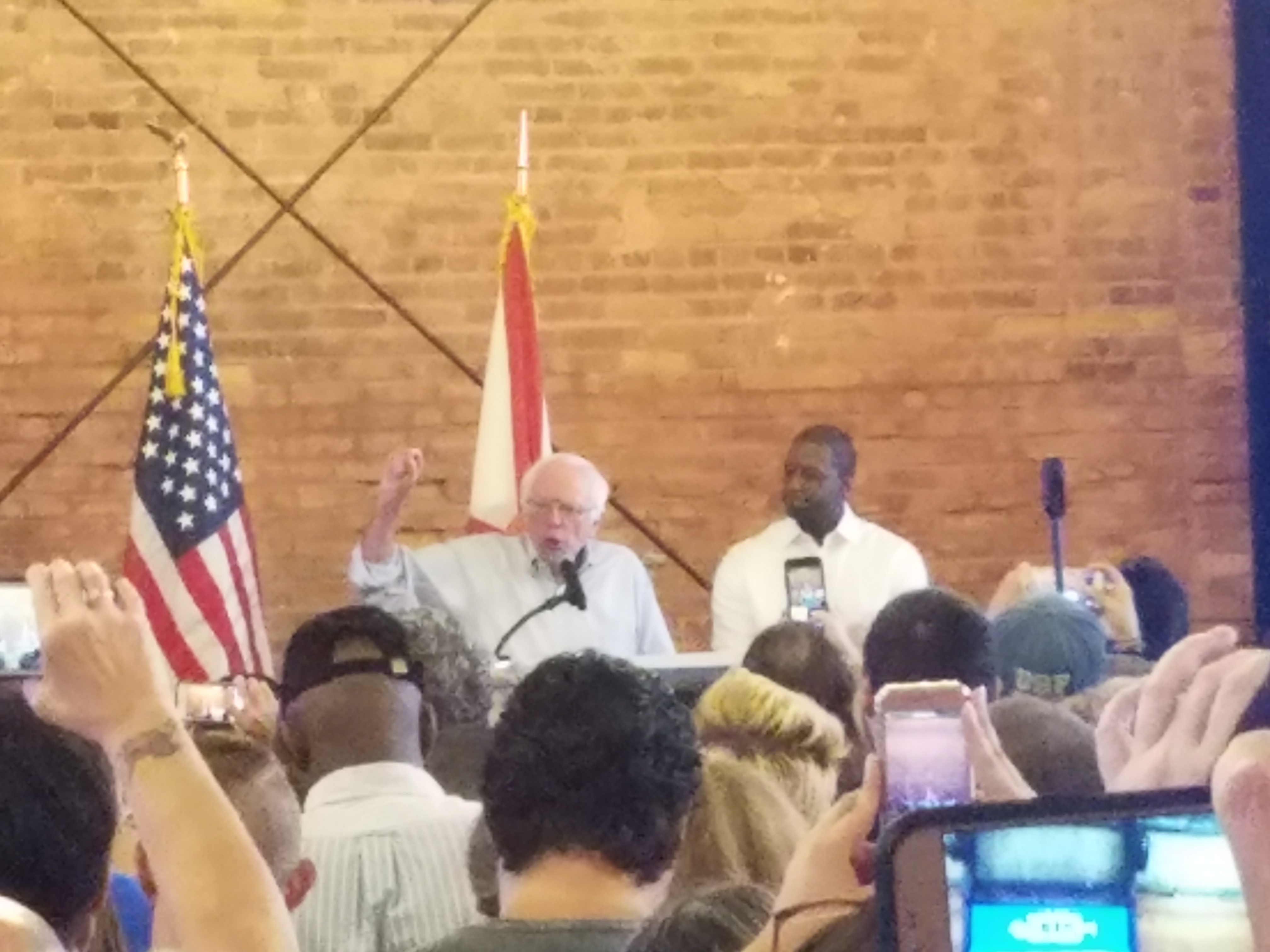 “There is no state in this country that can do more in leading the transformation of energy than the State of Florida. You know, there is a reason why this state is called the Sunshine State. Maybe your governor does not know that, but when you call the state the Sunshine State it’s because there’s a lot of sunshine. And maybe instead of being dependent on fossil fuels and paying sky-high electric rates, maybe you should transform the energy system here under Andrew [Gillum] and lead the country – not lag – in the fight against climate change. We need a governor here in Florida who understands that the time is long overdue for comprehensive immigration reform. And who understands the people of Puerto Rico deserve to be treated with the respect and dignity that they deserve as American citizens. And being here in Florida today I want to say a special word of thanks to the young people in Parkland.”

Listen to this quote here:

Listen to the full speech by Sanders here:

Watch the rally by Andrew Gillum and Bernie Sanders:

Here’s the end of Sanders’ speech: