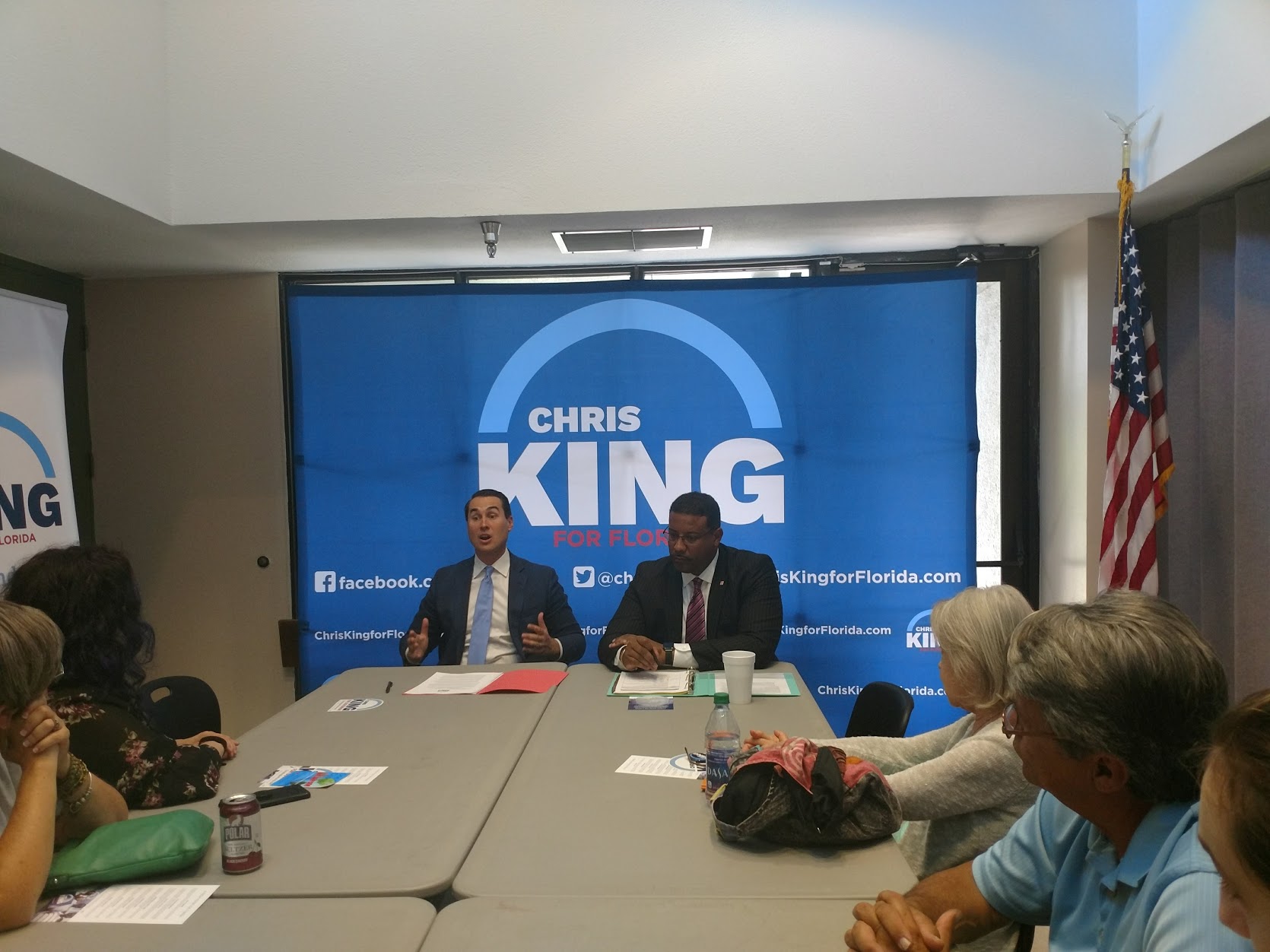 Labeling it as “incredibly bold,” Democratic gubernatorial candidate Chris King unveiled a criminal justice reform package on Tuesday that included a call to end the death penalty and full support for the legalization of recreational marijuana in Florida.

“These issues are big and bold and progressive and they’re going to be hard to acccomplish, and we’re going to need your help. But we’re swinging for the fences,” the 39-year-old Winter Park businessman told a group of progressive activists who gathered at the Enoch Davis Center in South St. Petersburg.

The boldest issue that King is taking on is his call to eliminate the death penalty, which historically Florida voters have supported, though recent polls indicate that stance is changing, at least in more urban areas.

“I recognize that this is probably not the politically smart thing to do,” he admitted. But he said that it was too expensive and wasn’t a deterrent to crime, factors that critics have touted for years. And he said that it has been used disproportionately against people of color in Florida.

King also noted that Florida leads the nation in death row exonerations with 27. The Sunshine State is one of 31 states that continues to administer what has always been considered the ultimate sanction for wrongdoing.

King said he knows he won’t be able to persuade the GOP-led Legislature to change the laws on the death penalty, but said that if two other Democrats get elected to the Cabinet this fall, they could vote as a bloc to commute any death sentences to life sentences without parole when those cases came to the governors desk.

On prison sentencing reform, King says that the state has actually increased the number of prisoners in its correctional faculties over since 2005, a somewhat stunning statistic compared to other red states that have instituted criminal reform bills during that time. He says if elected he would aim to reduce mass incarceration by 25 percent in the next five years and 50 percent in the next decade for non-violent offenders. To do that, he says he would support eliminating mandatory minimum sentences for nonviolent crimes, instituting “gain-time” reform and pushing civil citation programs.

(Gain time is the state law that says that Florida prisons can only discount a sentence 15 percent under most circumstances, and thus all prisoners must serve at least 85 percent of their sentence. Other states have greater flexibility in gain-time).

King is also now also calling for the legalization of marijuana, a policy change from a month ago, when he essentially punted the issue when it was discussed during a gubernatorial debate in Tampa last month. As is the case with his argument in abolishing the death penalty, King noted the disproportionate rates of people of color who get cited for smoking pot vs. whites.

“In Pinellas County and in Hillsborough County, if you are black, you are almost six times more likely to go to jail for marijuana possession than if you are white,” he said. “As someone who has had to evolve on this issue, that is of great concern to me.”

King also invoked what has become known as the “school-to-prison pipeline” and said he intends to use an estimated $850 million to reinvest in K-12 education, state colleges and universities, as well as with the Dept. of Corrections and Childcare and Early Childhood Development. He also says he would do everything in his power to end private prisons in Florida.

King was joined in the discussion by Tampa House Democrat Sean Shaw, who is running for attorney general this year. Though neutral in the race for governor, Shaw said he embraced the policy proposals that King was introducing. “He’s an aggressive optimist,” he said admiringly of the candidate sitting to his right. “I love it.”

King is running against Tallahassee Mayor Andrew Gillum, former U.S. Rep. Gwen Graham and former Miami Beach Mayor Philip Levine in the race for the Democratic nomination. Former U.S. Rep. Patrick Murphy and former U.S. Senate candidate Jeff Greene have also taken polls of late to determine if there is any interest in their entering the race.

Unlike some roundtables held by candidates, it wasn’t apparent that the dozen or so people sitting around the table with King were supporters. Pinellas Democratic activist Bonnie Sklaren said while she was impressed by what she heard, she asked King how he would be able to successfully get out his message some three months before the primary?

King as a first-time candidate he understood the question, but said his political persona as a progressive businessman is something is what he hopes will distinguish himself from the field come August 28.