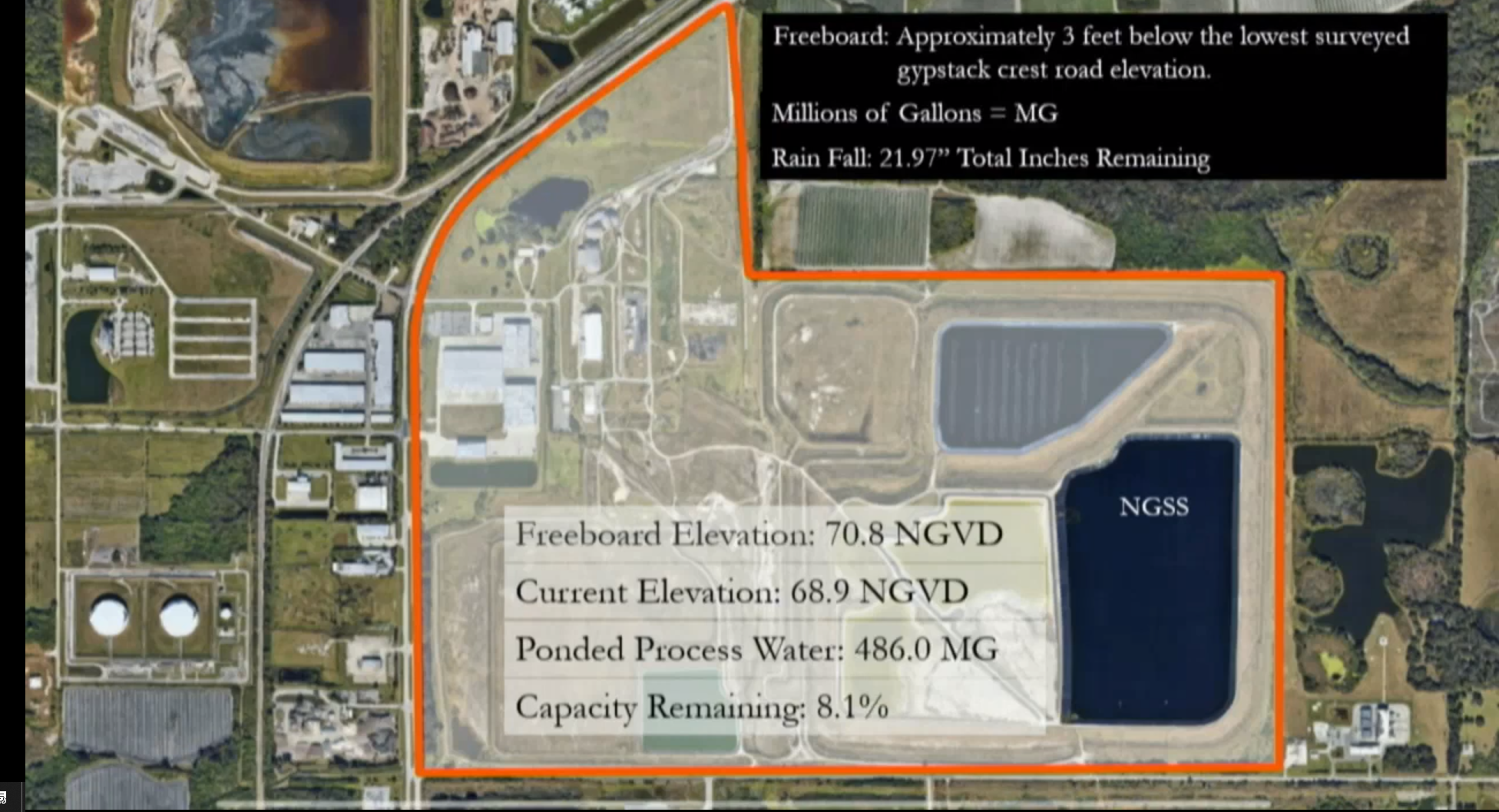 Note, this is one of the many articles about the pending disaster at Piney Point that WMNF has published over the years. This one is from September 2020. In April 2021, a breach occurred, threatening a possible collapse of a gyp stack. In response, a controlled release of millions of gallons of polluted water is being sent into Port Manatee.

Contaminated water at the former Piney Point phosphate plant is nearing the site’s capacity, putting all of Tampa Bay at risk for an environmental crisis.

Manatee County Commissioners heard from the site’s manager and the Florida Department of Environmental Protection Tuesday as officials struggle to come up with a plan.

Time is quickly running out at the Piney Point Reservoir near Port Manatee and the shores of Tampa Bay.

Site Manager Jeff Barath of HRK Holdings, the company responsible for operating the site, told commissioners Tuesday the three ponds of contaminated process water are at more than 92-percent capacity, with less than 8 percent quickly dwindling. That means the site can only handle about 19 more inches of rain.

Though the phosphate plant has been closed for years, stakeholders have struggled for decades with how to handle the dangerous waters that sit just south of the Hillsborough-Manatee County line.

“This has been going on for years and years, ” Manatee County Commissioner Betsy Benac said.

She added, “There is no more important issue in my mind than our water quality in Manatee County, and that’s what this issue is about.”

But removal of the water is costly and time intensive, it’s also complicated because the County doesn’t own the site or have a final say. That’s ultimately up to HRK. Commissioners have worked to help come up with solutions, the most persistent being construction of a deep-water well onsite. But not everyone is on board.

“If you go with a deep-water injection well, well, it’s out of sight out of mind. It’s taken care of,” Commissioner Vanessa Baugh said. “Today that might be true, but you don’t know 30 years from now that all of a sudden something happens and we’ve contaminated the are, the water supply, the Bay.”

Some commissioners want to use a technological solution, like cleaning the water so it’s able to be released into the Bay, but neither the science nor the funding seem to be there.

“We don’t have the time to sit here and say there’s some technological solution in the future,” Benac said.

Barath told commissioners no plan is going to be perfect.

“Whatever the direction there is obviously a certain puddle of mud that we will all be walking through,” he said. “There is no smoking gun, that I’m aware of, that is out there.”

As Barath told commissioners, rainfall across the state has been drastically increasing year over year. The 2020 hurricane season has been so active, we’ve even run out of named storms. And it’s more than just what falls over the site that’s concerning.

“Not necessarily just the rainfall that’s falling over the site and the coastal community,” Barath said. “The watershed on things that are happening inland. They’re running to the Gulf. So we are influenced by those as well.”

With some single weather events, like Hurricane Harvey, producing more than 60 inches of rain elsewhere, commissioners, like Misty Servia noted that those 19 inches could run out quickly.

“one hurricane and we’ve got a major crisis,” she said.

John Coates of the Florida DEP suggested 50,000 gallons of water from one pond could be discharged to the County’s wastewater plant in Palmetto per day, buying some time. Another pond would need 75,000 gallons pumped per day to reduce the threat level, but there’s no solution locked in.

Commissioners are likely to vote in a future meeting on discharging the 50,000 gallons per day to the wastewater plant, but there’s still a persistent threat from the other pond, which on its own can handle less than 22 more inches of rain.

Without having a long-term, permanent plan or looking at options, Piney Point remains a persistent threat to the waters of Tampa Bay.

“This is a band-aid,” she said. “Fifty-thousand gallons a day would take 40 years, with no rainfall, to empty the 720 million gallons of water.”