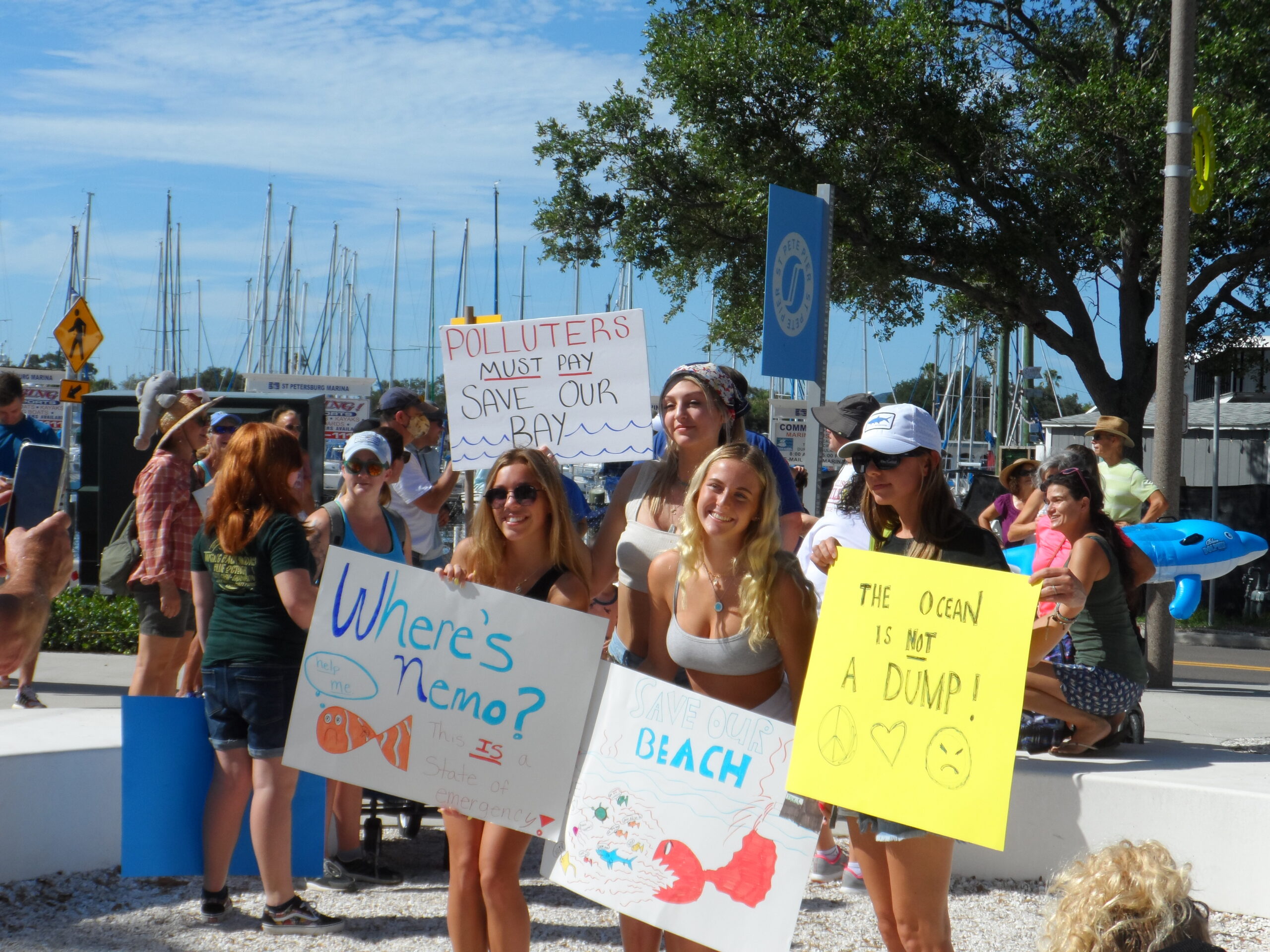 On Saturday more than 250 people marched past fish kills along the downtown St. Petersburg waterfront to demand that state leaders do more to stop a major red tide outbreak. Hundreds of tons of fish have been removed from shorelines. But dead, rotting fish continue to foul the water.

At the rally, WMNF spoke with Lindsay Cross, a Democrat running for the Florida House.

“This is a really important event or rally against red tide because it shows that the community is coming together to demand change from our legislators. Not only at the state level but at the federal level, to get serious about protecting our water to enact stronger water pollution standards, make polluters pay.

“Things like Piney Point can’t continue. We know that we’ve got gypsum stacks around our state. And these are all ticking time bombs that need to be addressed. We need closure plans for these, and ways to treat the water, and safely dispose of it, so that we don’t have catastrophes like these affecting our Tampa Bay, and our coast along the Gulf of Mexico.”

For people who aren’t here, haven’t been in downtown St Petersburg in the last few days, describe what you’re seeing right now and what it smells like here, maybe a hundred yards from the water. What’s it like?

“It’s heartbreaking and it’s pretty disgusting. I live about five blocks from Tampa Bay. And my dog and I walk along Coffee Pot Bayou every day. And I can smell the stench of rotting fish and marine life immediately when I step outside my door. And that’s, you know, a quarter mile from the bay.

“We’ve seen goliath grouper washed up along Coffee Pot Bayou. We know there’s been dead manatees and juvenile dolphins that have already succumbed to this, as well as these sport fish that people come from all around the world to Florida to fish for snook and tarpon and sea trout. And they’re dying in record numbers.

“So, it is absolutely heartbreaking. But things like this are preventable if we have stronger pollution standards and more accountability, not only for corporations, but also for our lawmakers,” Cross told WMNF.

Cross is a conservation advocate with Florida Conservation Voters. She is running for State House District 68, which is being vacated by Democrat Ben Diamond who is running for the seat in Congress currently held by Charlie Crist. Both Crist and Diamond were at the rally. So were at least three St. Petersburg mayoral candidates, Ken Welch, Darden Rice and Pete Boland.

Crist is running again to be Governor of Florida. Here’s what he told WMNF at the Rally Against Red Tide:

“Well, this is where I grew up, and it breaks my heart to see what is happening in Tampa Bay right now. I’ve never seen a red fish kill worse than this one that we’re experiencing right now. And I think that one of the main thrust, at least, is to get the governor, convince the governor to declare a state of emergency. The city has borne the brunt of the expense of cleaning up all these dirty fish, dead fish. And we need help. We need help from the state. And so, I hope Governor DeSantis comes around and gives us that help.”

That doesn’t sound like what [Florida Governor Ron DeSantis is] doing today. Today he’s traveling to Texas instead of Florida. What do you think about that?

“Well, I mean everybody has their own agenda. And it seems more and more, as time goes on, his is national. And, you know, he seems to be forgetting Florida. And that’s all right. Florida is special, and I love Florida. And we need to have a governor who is focused on Florida. And that’s why I’m running,” Crist said.

“I think that’s a case of partisan politics where we need to put politics aside. We know that water is something that unites Floridians across the state. We all need it to survive. But it’s also the backbone of our economy. A study was done in Tampa Bay looking at the economic importance of Tampa Bay because we’ve invested billions of dollars over many decades, decades to restore Tampa Bay from a once dead water body to something that is a centerpiece of our region.

“We know from that study that one in five jobs is dependent on a clean and healthy Tampa Bay. So, when our Bay is littered with dead fish, and people can’t get out and enjoy the waterfront properties, they’re not coming here to stay in hotels or at beaches, then our economy is gone as well. So, it’s not just a “nice to have thing” a beautiful bay, it’s a have to have,” Cross told WMNF.

The March Against Red Tide went along the St. Petersburg waterfront. The participants thanked City of St. Petersburg workers who were filling trash containers with dead fish they scooped out of the water.

Marchers thank city workers for cleaning up the fish kill: