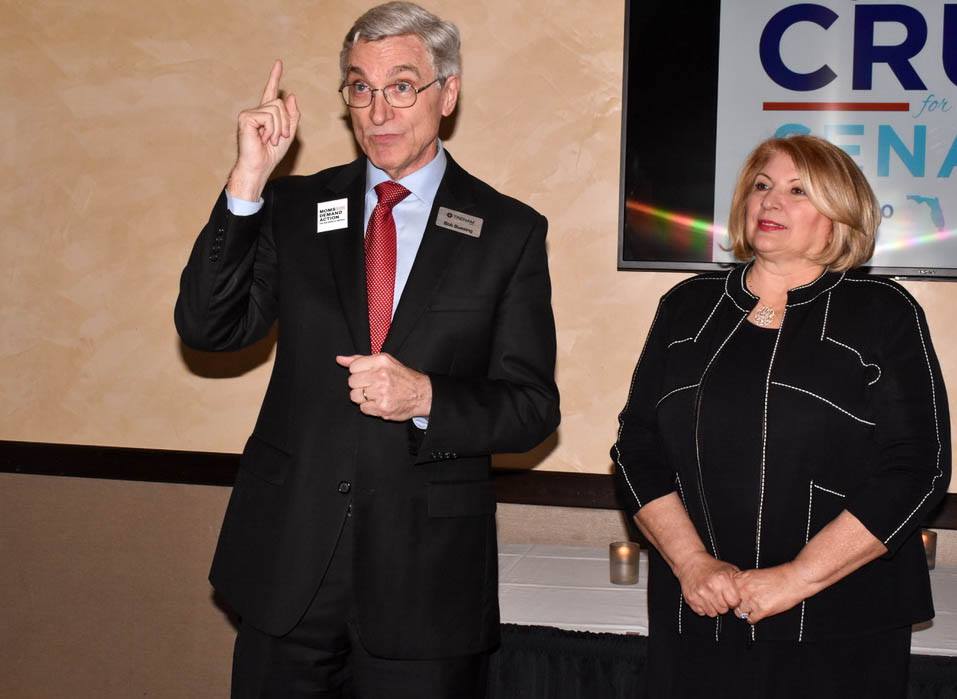 If the Florida Democratic Party is ever going to end up being competitive when it comes to gaining parity with Republicans in the state Legislature, there are certain races that they have to win, such as the state Senate District 18 seat in Hillsborough County this fall.

The district ranges from South Tampa and downtown up to the northwest part of the county, and as currently occupied by Republican Dana Young, is one of only two GOP-held districts captured by Hillary Clinton in 2016.

Young withstood a a two-pronged attack against her in the newly created district seat in 2016 when she defeated Democrat Bob Buesing (by 7 points) and independent Joe Redner, who received 9.5 percent of the vote.

Democrats felt that Buesing could have won the contest without Redner siphoning away votes from him the last time around, and were happy when Redner bowed out of a 2018 run and endorsed Buesing.

But after 17 people were killed in a shooting massacre in Parkland, Florida on Valentine’s Day, Janet Cruz says she felt compelled to enter the contest. Term-limited out of her House District 62 seat, the Tampa Democrat had announced in 2017 that she would compete for a seat on the Hillsborough County Commission this year. But she said her ambitions changed after Parkland.

“When Dana Young walked away from that vote, it changed everything,” Cruz said Thursday night at a fundraiser for her held at Pane Rustica in South Tampa. “It was absolutely infuriating and I was angry that she is representing our district. ”

Cruz was referring to the fact that Young missed votes on three key amendments related to gun regulations on a special Saturday session held in the immediate aftermath to the Marjory Stoneman Douglas High School shooting (Young told the Tampa Bay Times that she had to step off the Senate floor briefly during the eight-hour session, and recorded positions afterward on the votes she missed – all in the majority, so they wouldn’t have affected the outcome).

Cruz said she was prepared to run and serve on the county commission this fall, but was inspired by Democrats who were angry about the failure to pass legislation banning assault weapons in the wake of the school shooting tragedy.

“I saw an absolute uprising and a resistance of the Democrats to say, ‘we’re not taking your crap anymore. We’re not going to get along just because we’re in the minority.’ And it was the most exciting time that I had ever seen in Tallahassee. And I drove away on that last day and I said, ‘I cannot leave this. My work is not finished. I want to see this through,'” she said.

Buesing refrained from commenting publicly after Cruz announced her intentions to compete in the Democratic primary last month, before ultimately dropping out and endorsing her for the contest that he had never stopped running for after the 2016 contest. Thursday night’s fundraiser for Cruz’s SD 18 campaign was billed as an “Evening of Democratic Unity” because it featured the two Democrats sharing a stage for the first time since he dropped out of the race.

Buesing, a longtime attorney with the Tampa law firm of Trenam Law and a childhood education advocate,  eschewed offering platitudes about his decision to drop out of the race after Cruz opted in. Instead he admitted to the audience of fellow Democrats that he had gone through the five stages of  grief that were first proposed by Elisabeth Kübler-Ross in her 1969 book On Death and Dying: denial, anger, bargaining, depression and acceptance.

He admitted initially to be in denial that he would be usurped by another Democrat, and then anger, though he said he dismissed that rather summarily because “we do not have the luxury, we do not have the time. Do not spend one minute’s energy on that.”

He also acknowledged to feeling some depression about the outcome, before ultimately accepting that Cruz was a progressive candidate who was doing the right thing.

Buesing also acknowledged previous bitter and divisive Democratic races at the presidential level, and said a replay on a more local level could similarly result in Young’s reelection.

“I’ve learned the lesson of the Al Gore/Ralph Nader race (in 2000), which gave us what we thought was the worst president in modern times,” he said. “And I’ve learned the lesson of the Hilary Clinton- Bernie Sanders fight that gave us an even worse president, and I think the lesson from both of those elections is if Democrats unify, get together, you will win if you unify, if you do something crazy against one another, you will lose.”

Cruz began her public remarks by telling Buesing that she owes a debt of gratitude towards her fellow Democrat for opting to step aside for her.

“I don’t think that we will ever know a more honorable and spectacular man that we know in Bob Buesing,” she said to cheers. “There will be a day where I will make this up to Bob Buesing.”

Cruz reported raising more than $93,000 in her campaign coffers in April, her first month as a candidate for the senate. More than $62,000 of that money was shifted from her county commission race.

Young has approximately $1 million cash-on-hand between her campaign account and political committee.

Former state CFO and prominent Hillsborough Democrat Alex Sink said it was great that the Democrats were now united, but added that it would take much more to defeat Young.

“This is a really, really important race. This senate district is one of the top take back districts in the whole state of Florida. We’ve already seen a lot of national interest in it,” Sink said, adding that as opposed to 2016, Young is now an “entrenched incumbent” who could ultimately raise more than the $5 million that she and the GOP put behind her in 2016 “because the Republicans are not going to want to give back this seat.”

There are eight more Republicans currently serving in the state Senate than Democrats, 23-15, giving the D’s hopes that a “blue wave” could bring them closer if not an outright majority in the Legislature’s upper chamber.

There is no discussion about that happening in the House, where Republicans dominate Democrats, 75-40.