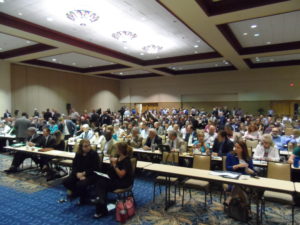 The three task forces that will decide the parameters of new toll roads through rural west Florida met for the first time Tuesday at the Tampa Convention Center.

But many environmental groups oppose the toll roads, saying they’re unnecessary, will lead to sprawl and could harm sensitive ecosystems and natural resources.

“We’re at the Tampa Convention Center for the first M-CORES Task Force meeting. And I’m here because our organization has opposed this throughout the entire process. We think it was legislation that was rushed through too quickly, and represents bad government. It’s something that wasn’t called for by the people, and will have serious implications for our water and our wildlife and economies in rural communities.”

SK: How could impact it impact water and wildlife?

“Well, we already have grave water quality concerns that we’re seeing. We have infrastructure that needs to be fixed; septic systems that need to be upgraded. And sewers that are regularly leaking wastewater into our precious water bodies. We are not putting the investments into those. And if we start to fill our wetlands and pave over our springs, we’re going to have even more problems than we have right now.”

SK: The argument goes: There are so many people moving into Florida that we’re going to have to have roads for them to transport on.

“The issue with this is that these type of roads are meant to spur development in undeveloped areas right now — in some of our best remaining natural and agricultural areas. And we know that if we have slight increases in density and start to build more in the periphery of our urban areas right now, we can protect a lot of the natural areas.

“This [proposed toll roads] would be paving through some of our best remaining farms and ranches and places for wildlife. So, it’s using a model that is based on sprawl, on low-density, which is not going to be sustainable for the long-term of the state. So, I think, what we need to do, is take a look back and be more conscious and conscientious about how we’re developing, and not just put these roads in, because we know that that’s going to lead to development and many other things down the road.” 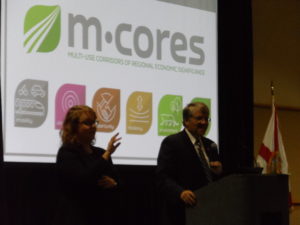 The Task Forces will meet seven times and submit a final report to the governor by October 1st of 2020. Construction of the toll roads is scheduled to begin by December 31st, 2022 and the roads will be open to traffic by 2030.

“Well, it’s going to be a collaborative effort, you know. A lot of meetings. I think we have a total of seven different meetings, which will be bringing a lot of sensitive subjects to the table for discussion. And, we want these task force members to go back out into their community to share the information that was discussed. And, also to gather any concerns or value input that they can bring back to the task force for consideration in the planning process.”

SK: So, at the end of the process, if it’s decided that there is not a need for a road, would that be one of the options?

“Well let’s don’t speculate on that, right now. Let’s take a look at the opportunities that we going to have as a task force, and see what considerations are brought to the table. Of course, we want to avoid — minimize the impacts of any, you know, cultural resources or any community characteristics that may be there. So, lets don’t throw the baby out with the bathwater just yet.” 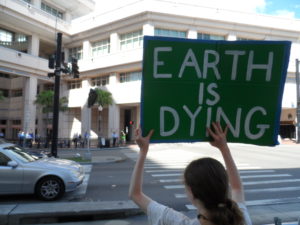 “We have an amazing network of public lands and working agricultural lands that combines this green infrastructure that is so critical to every citizen in the State of Florida. And, toll roads and other sorts of development infrastructure, if they don’t first consider the Wildlife Corridor Network, it’s really going to undermine and undo a lot of conservation progress from the past decades.”

SK: Why is it important that wildlife have continuous areas where they can roam?

“We look at our widest ranging animals, like the Florida panther. The Florida panther requires a home range of up to 200 square miles. So that’s about four times the size of Miami. And, there are very few individual public properties that can serve the needs of even a single Florida panther. So for the Florida Panther to survive, it needs the network of the state park, the state forest, the adjacent cattle ranch, the orange grove – that whole green fabric that unites these wild and semi-wild places in Florida.”

SK: And one of these proposed toll roads, cuts right through Panther territory.

“One of the real pivotal moments, is what we’re going to do for the South Florida Corridor. We have the first female Panther in nearly 50 years. It’s been documented in Babcock Ranch on the north side of the Caloosahatchee River, giving hope for the panther breeding population to recover further north into northern Everglades. Well, that’s the exact same area where one of these new toll roads is proposed to go.”

SK: Is there anything else that people should know about how they can get involved?

“What I would ask everyone to do, is just demand that people make the investments in land conservation because that is ultimately what’s at stake here. People are here for this meeting to talk about planning toll roads. But, ultimately, what they’re doing, is designing the future of wild Florida. And, if we don’t get out and proactively protect large landscape linkages for watersheds and for wildlife, we’re going to end up fragmenting and chopping up the wild heart of Florida, to the detriment of everybody.” 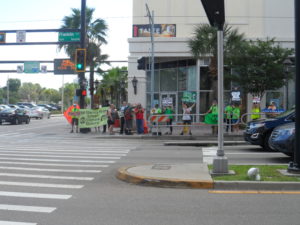 During a break in the meeting about fifteen protesters from Extinction Rebellion and other groups blocked Franklin Street outside the Convention Center. Other demonstrators handed out flyers to people in the cars that were impeded. Police warned them to get out of the crosswalk because they were breaking the law. After about four minutes, all the protesters cleared the street and traffic went on its way.

More video of their street-side protest: