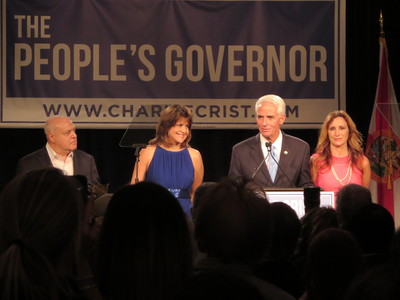 Charlie Crist lost to incumbent governor Rick Scott in a tight, neck and neck race. Crist’s campaign hosted an election night event for staff and supporters at the Vinoy Hotel in downtown St.Pete. As the clock approached midnight, Crist conceded defeat in an address to 1000 attendees and to Floridians.

The election numbers trickled in all evening showing an edge to Rick Scott over Charlie Crist, but no clear winner until media outlets called the race for Scott after ten o’clock. Then at around 11:45 the big screen tvs all went blank as Crist took to the podium to deliver his concession speech. He urged cooperation.

Crist’s election night event drew a bevy of media outlets as well as a who’s who of Florida Democrats. One of those was U.S. Senator Bill Nelson. Nelson suggested that dark money and dark campaign ads might be the reason for the GOP’s big win.

There will be a historical first this next congressional session; 100 women. Some think that more women in politics will change perspectives and possibly the partisan gridlock. The chair of the Democratic National Committee, Congress member Debbie Wasserman Schultz, was at the Crist event. She doesn’t think the re-election of Florida Attorney General, Pam Bondi, necessarily means progress.

After his defeat, Charlie Crist did not indicate what his political future holds.